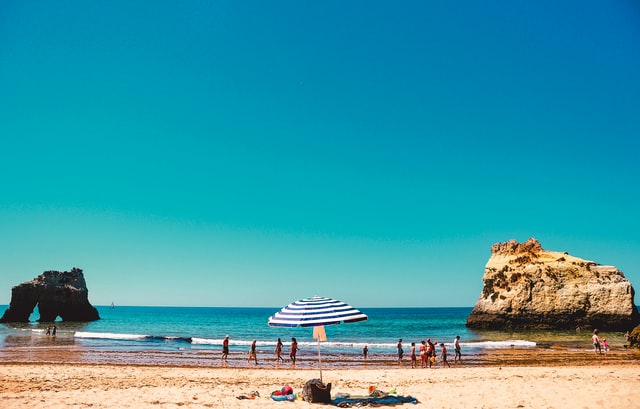 After 2 months of strict lockdown, Portugal has finally reopened its borders to travellers and placed on the UK’s “Green List” after bringing the COVID-19 outbreak under control.  It was so efficient in doing so that it is now one of the countries able to fully open up for the summer tourist season. Already, travellers from the EU and a few other selected countries are able to book a Portuguese break and enjoy the much-awaited Portuguese sunny beaches.

The Portuguese Tourism sector has requested for the Government to authorise British citizens to travel to Portugal starting this coming Monday the 17th. Holiday bookings to Portugal have skyrocketed and this will no doubt boost the Portuguese economy and get the tourism sector back on its feet.

On top of this, land borders have already opened between Portugal and Spain for the first time since January 2021, now allowing free movement of people between the two countries.

Portugal Allows Travellers from the EU and Schengen Area

As well as travellers from Spain, Portugal is now officially welcoming visitors from across the EU and Schengen area. Most air routes to Portugal have now resumed, although some have reduced services in place. As a result, people from throughout Europe can now book a break in the Algarve or soak up some Lisbon culture.

Negative Covid tests will be required on arrival, this measure was expected and used to control the pandemic across borders. Residents of countries with infection rates of 150 per 100,000 inhabitants are only allowed to travel for essential purposes while those with rates of 500 per 100,000 or more have to undergo compulsory 14-day quarantine on arrival in Portugal.

According to the Portuguese government, “essential travel” is defined as trips allowing the transit, entry into and departure from Portugal for professional purposes, study, family reunions, health and humanitarian reasons and under the reciprocity principle.

Portugal Opening Up to International Travel

Portugal is slowly adding countries from outside the EU to its travel green list. At the moment, citizens and residents of Australia, China, New Zealand, Singapore, South Korea and Thailand are also allowed into Portugal. However, if they’ve travelled via a country on Portugal’s red list, they may still be required to undergo quarantine on arrival.

The UK government recently announced its list of 12 countries and territories that Brits would be allowed to travel to without quarantining on their return. The list included a few far-flung island groups like the Falklands and Faroe Islands as well as popular long-haul destinations like Australia and New Zealand.

Portugal and Gibraltar were the only short-haul summer sun destinations to make the UK’s list. This means it’s very likely Portugal’s beaches, resorts and cities will see an influx of British tourists when quarantine-free travel comes into force on May 17th. While tourist numbers may not reach the same level as previous years, these visitors are still likely to bring much-needed income to the country’s hotels, resorts, restaurants and attractions.

Portugal’s efficient handling of its second COVID-19 wave has put the country in an excellent position to take advantage of the summer tourist trade. As a result, Golden Visa holders with investments in Portuguese venture capital (VC) funds should continue to see good returns.

The S&P Global Ratings agency has forecast that Portugal’s economy will grow by an impressive 4.8% in 2021. This will help to significantly reduce the government deficit and shrink the country’s debt-to-GDP ratio. This is all good news for people financially invested in the Portuguese economy and indicates that the country’s recovery from the pandemic could be quick and comprehensive.

If you’re currently considering acquiring the Portuguese Golden Visa, we can help. Planeur has plenty of experience in helping people from around the world take full advantage of the opportunities on offer. We can walk you through every step of the process and answer any questions you may have on the way. Find out more by getting in touch with a member of our team today.