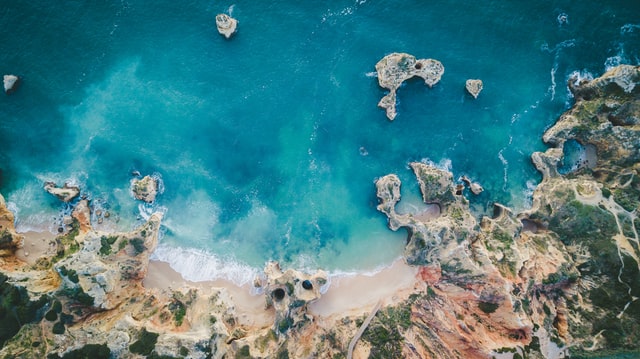 Everything you need to know about the Algarve

The Algarve is Europe’s sunniest and most popular vacation destination in the beautiful southern coastline of continental Portugal, where there is no shortage of high-quality beaches, sandy stretches, and golden cliffs.

The Algarve is also considered to be the best-golfing destination in the world by magazines devoted to the sport and by international associations of specialist tour operators, the Algarve lives up to this distinction by maintaining an unrelenting quality spread from one extreme of the region to the other. By the beach or further inland, flat or hilly, the choice is varied. Here you will find wonderful little quaint places to visit.

Sitting on the River Gilão and one of the prettiest towns of the region. Tavira is a destination celebrated for its historical legacy, a past shaped by the Romans and later by the Moors, whose settlement by the river was topped by a castle, still visible today.

You can best view the town by ferry that departs from the quay to the Ilha de Tavira, a favorite destination for sun-seekers and one of the few islands perfect for a sightseeing cruise along the Ria Formosa, a beautiful and unspoiled waterway that is part of the protected natural park.

Here you will be sure to find the best seafood restaurants in the region as it is Algarve’s busiest fishing port. The market by the harbor is one of the largest and most vibrant on the coast, where you can find the freshest fish, fruit, and vegetables.

From this waterfront town, you can explore the Parque Natural da Ria Formosa and its wealth of wildlife or simply cross to the near-deserted islands of Armona, Culatra, and Farol by ferry and enjoy a sunny day out.

Loulé has long been a commercial hub that remotes back to the Later Paleolithic. The Romans had then settled here and expanded the economic activities, agriculture, and exploration of copper and iron. This town soon became a tourist attraction, where you can visit the Castle of Loulé built in the 12th Century, the beautiful 16th-century Capela Nossa Senhora da Conceição, or the 19th-century neo-Classical Arabesque-inspired marketplace of Loulé.

Still part of Loulé Municipality, Vilamoura is considered to be one of the largest single tourism complexes in Europe developed around the well known Vilamoura Marina holding 845 berths, surrounded by luxury hotels and sandy beaches.

Vilamoura is also famous for golfers all year round for its five different Gulf Courses but nonetheless, it is a family-friendly destination with plenty of activities for kids too.

Albufeira has become a tourist destination due to its wonderful coastal conditions that include the marina facilities, golf courses, restaurants and bars for the annual flood of visitors.

The biggest tourist attraction in Albufeira is no doubt the stretches of sandy beaches and spectacular cliff-backed coves with warm and blue shallow waters.

Being the second-largest city in the region, Portimão and historically a fishing and shipbuilding center, overlooking the River Arade.

The award-winning Museu de Portimão is a must place to visit. It traces back to the early interaction of man and his environment in the Portimao area over a period of five millennia, with particular emphasis on the fishing industry and the sardine canning industry that was so vital to the Algarve’s economy.

But Portimão is no doubt visited by many due to its lovely resorts by the many beaches, with Praia da Rocha being one of its most popular.

Beautiful Lagos is visited by many due to its variety of tourist-friendly beaches, rock formations, bars, restaurants and hotels, renowned for its vibrant summer nightlife.

It was here that many maritime expeditions departed to the African coast.Lagos’ economy, like many coastal towns in Portugal, has always been closely linked to the sea, and fishing has been an important activity since very ancient times.

The port of Sagres, is a historical center of the Portuguese discoveries and fishing port, marked by two geomorphological structures: the Cape St. Vincent and Sagres Point. Best seen by Fortaleza de Sagres.

Sagres welcomes a predominantly young crowd drawn to inexpensive accommodation, simple restaurants, and proximity to some truly fantastic beaches. Sagres is Europe’s surfing capital, and the destination hosts many of the World Surfing Championships.

To find out more about how to acquire the Portuguese Golden Visa for yourself and your family. contact Planeur.