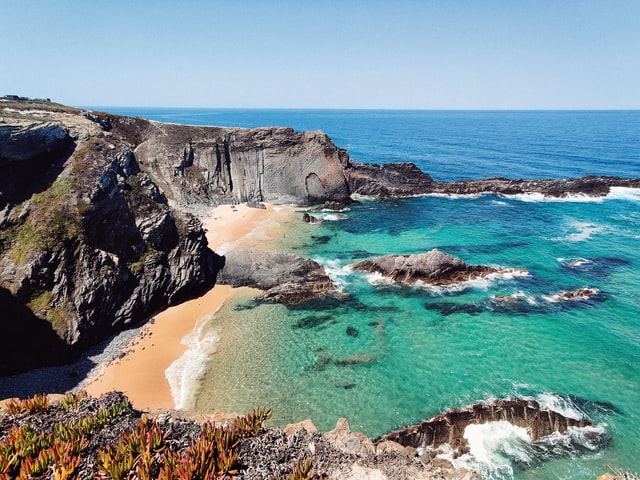 Come and Explore the Wonders of Alentejo

The region of Alentejo boasts an amazing well-preserved coastline with the most beautiful beaches in the country, nature-rich countryside filled with farmland, cork oaks, olive trees, vineyards, wineries, and charming traditional villages oozing with traditional heritage.

It is Portugal’s largest region and known to be the wildest, extending from the Algarve upwards towards central Portugal, reaching from the Atlantic on the West coast to the East of the Portuguese-Spanish border.

From Setúbal, you can cross the River Sado estuary by ferry to reach Troia peninsula and enjoy many activities such as golf, surf, stroll along the beach to watch the dolphins, or soak in the region’s cultural heritage such as the Carrasqueira village on stilts and the Troia Roman Ruins which actually reveal how the area was already rich in natural resources two thousand years ago.

A is a much-appreciated spot for a family beach outing with excellent restaurants. This is a paddy field area, so rice-based dishes are an unmissable specialty. To understand why Comporta is surrounded by rice fields, a visit to the rice museum is a must. You will discover the history of local rice growing and its traditions in the former rice husking factory.

Until you reach Sines from Comporta, the coast is an unbroken strip of sandy beaches such as Pinheirinho and Galé. In Melides and Santo André, where you may choose between the sea beaches and the lagoons depending on your wishes and preferences. Here you can find great places for windsurfing and canoeing.

Sines is an industrial and traditional fishing port, making it a stopping point for visitors to the region. It was here that Vasco da Gama, the great navigator, was born.

The natural sandy paradise changes from the port of Sines towards Zambujeira do Mar where the smooth bays change for more scenic beaches with rock formations through São Torpes, Morgável, and Vale Figueiras where a great wealth of the subaquatic landscape is much appreciated for diving.

A picturesque fishing village with a small port and a pretty square surrounded by traditional small white houses and colorful boats scattered along the beaches. From here you can reach the island of Pessegueiro opposite, visible out to sea.

At the mouth of the River Mira, you can explore the river by boat or canoe or even go upriver to Odemira.

But the Alentejo coastline is not only beaches. To the south of Sines, you enter the Parque Natural do Sudoeste Alentejano e Costa Vicentina (Southwestern Alentejo and Vicentina Coast Natural Park), abundant in hiking and mountain bike trails and various marked trails along the 450km which make up the Vicentina Route, between Santiago do Cacém and São Vicente Cape is a good way to get to know the region.

Below is a list of places to visit in Évora:

The Capela dos Ossos was built in the 17th century, following a model then in vogue, with the intention of provoking through the image a reflection on the transience of human life and the consequent commitment to a permanent Christian experience. Both the walls and the pillars are covered with a few thousand bones and skulls, coming from the burial spaces connected to the convent. The frescoes decorating the vaulted ceiling, dating from 1810, feature a variety of symbols illustrated by biblical passages and others with instruments of the Passion of Christ. At the exit of the chapel, on the opposite wall, a tile panel, designed by the architect Siza Vieira, contrasts the allusion of death with the miracle of life.

The Temple of Diana is of great prominence in the city and was built during the presence of the Romans in honor of Emperor Augustus. According to records, Évora would have been the headquarters of the Roman General Sertório’s troops.

The palace was built in the 13th century, however, it was only during the 14th century that the convent came under royal use but only became a proper palace under the reign of King John I, who used it as a personal retreat from the court.

To find out more about how to acquire the Portuguese Golden Visa for yourself and your family. contact Planeur.